Counterfeits worth about 225 million euros were seized by German customs in 2019. Year on year, this represents a strong increase of around 14 percent. The financial damage caused by every single counterfeit is on the rise, warns the German brands association.

Confiscated counterfeits worth around 225 million euros were recorded by German customs investigators last year. After fakes worth about 196 million euros had been seized in the preceding year, the value of the seizures has thus risen by about 14 percent. The number of confiscated goods also increased slightly, to around 5.2 million counterfeit items – an increase of around 2 percent, after a rise of more than 50 percent in 2018.

According to authorities, the increasing value of counterfeits seized is also due to a growing popularity of high-priced fake goods. Thus, seized personal accessories showed a significant increase of about 54 percent year on year, according to the value of counterfeits confiscated. This category includes products such as watches, jewelry, glasses, and bags. The German brands association Markenverband e. V. sees this as a cause for concern: “Accordingly, the financial damage for consumers with every counterfeit article has increased”, the association warns in a recent statement. 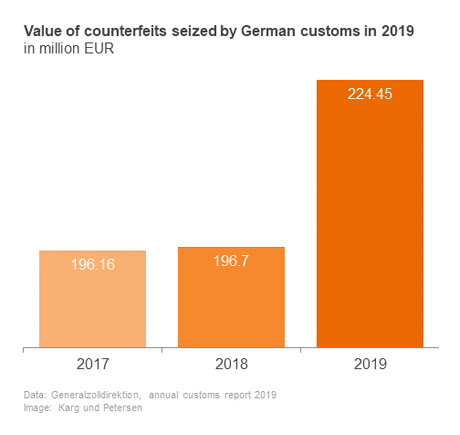 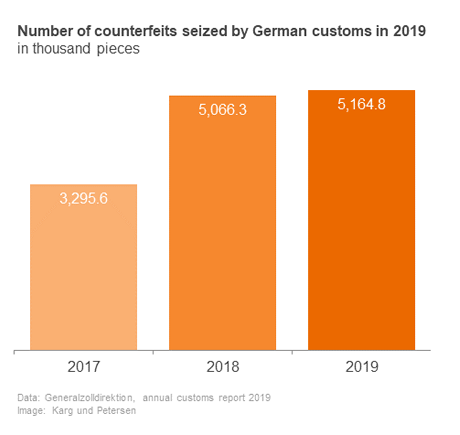 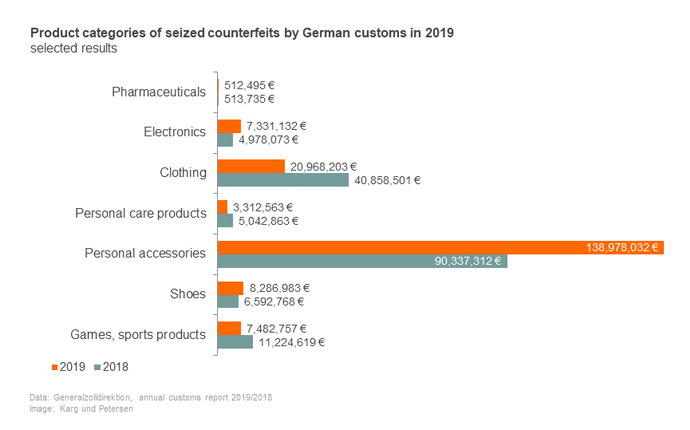 China remains the most frequent country of origin of illegal copies, but the share of the People’s Republic decreased slightly, falling by around 5 percent. Further relevant countries include Hong Kong, Turkey, Singapore, the United States, and Taiwan. Except for the USA, the share of each of these countries increased compared with the previous year. 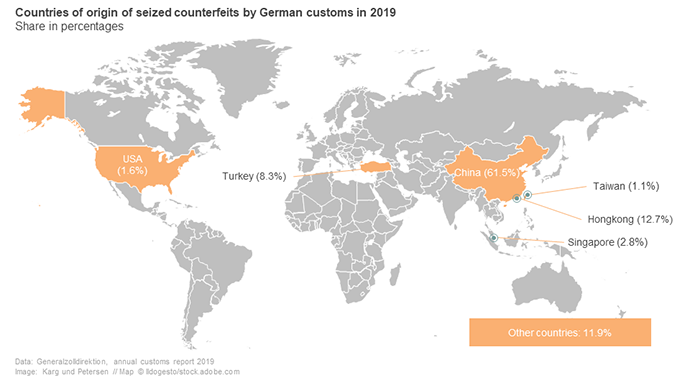 Nicole Hercher, President of the German Generalzolldirektion (Directorate General of Customs), draws a positive conclusion from last year. At the same time, she already addresses the challenges that customs are facing this year due to the coronavirus crisis. “Under the special conditions applying at this time, we are all continuing to work with high pressure to […] reliably fight customs crimes”, said Hercher.

Industry representatives, on the other hand, are calling for much stronger action against counterfeiting and brand piracy, and better monitoring of online trade in particular. “Very urgently, the European legislator is called upon to oblige all online marketplaces to proactively filter out counterfeits”, says Christian Köhler, managing director of the Markenverband. Köhler continued: “This would prevent a large proportion of counterfeit goods from finding their way to consumers.”