Worldwide, trade in counterfeit pharmaceuticals is estimated at more than four billion euros. This is the alarming result of a study by OECD and EUIPO. While two Asian countries are considered as main sources of the fakes, Germany is also named as a country of origin.

According to current estimates, the value of globally traded counterfeit pharmaceuticals in 2016 was approximately 4.04 billion euros. This is the result of a comprehensive report by the Organization for Economic Cooperation and Development (OECD) and the European Union Intellectual Property Office (EUIPO).

According to the study, the European pharmaceutical industry suffered sales losses of approximately 9.6 billion euros between 2012 and 2016 alone, which corresponds to 3.9 percent of total sales. The number of detected counterfeiting cases has risen rapidly – by about 102 percent between 2014 and 2018. Antibiotics, lifestyle drugs, and painkillers are faked especially often. However, drugs for the treatment of malaria, diabetes, heart diseases, cancer, and HIV, for example, were also frequently seized. According to the analysis, the trade in counterfeit medicines often runs through free trade zones; there, counterfeiters can package or re-package their goods and effectively obscure the origin of the fake goods.

According to the report, India and China are considered the main countries of origin of globally traded counterfeit pharmaceuticals, based on the value of seized products. India alone already accounts for just over half of the total value, followed by China representing around a third. Hong Kong and the United Arab Emirates (UAE) account for significant, but comparatively smaller, shares. 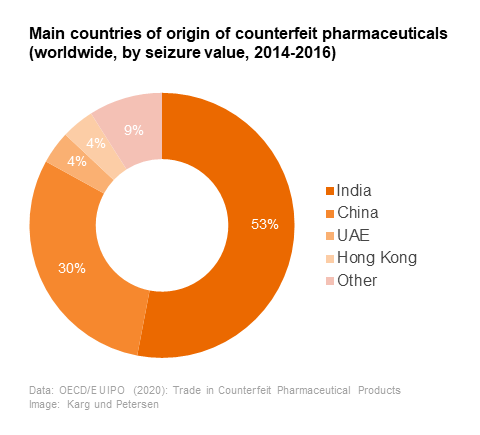 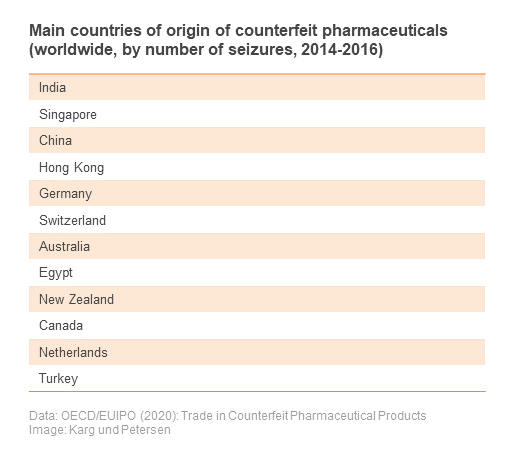 Looking only at the counterfeit medicines imported into the EU, the report also identifies the Philippines and Thailand as important producing countries, next to India and China. In addition, several countries are relevant as transshipment hubs of counterfeits, for example Hong Kong, Singapore, and Turkey; furthermore, Switzerland and the United States, for example, also play an important role as transshipment points for illegal pharmaceutical imports into the EU. 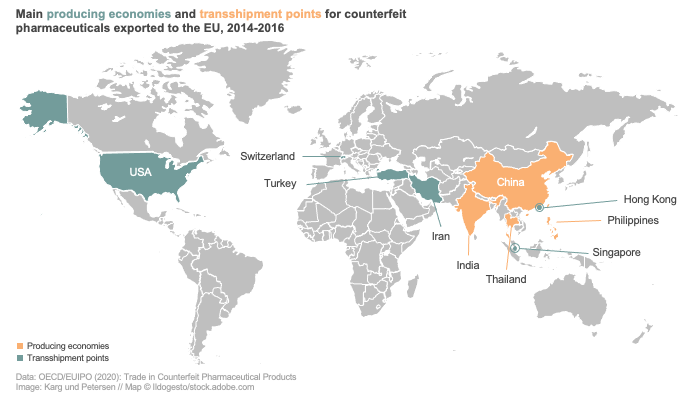 Counterfeit medicines are frequently transported in small parcels via mail or express courier. Based on the number of seizures, around 96 percent of the counterfeits were transported in this way between 2014 and 2016 worldwide. This represents an increase of 14 percent compared to the last estimate for the period of 2011 to 2013, which according to the analysis is due to the strong growth of online trade in pharmaceuticals. Counterfeits are traded both via freely accessible platforms and via the dark web.

Looking at the value of counterfeits seized, however, road and sea freight are relevant too. Remarkably, the share of road transport has increased significantly, from only 2 percent in the last period to now 43 percent. 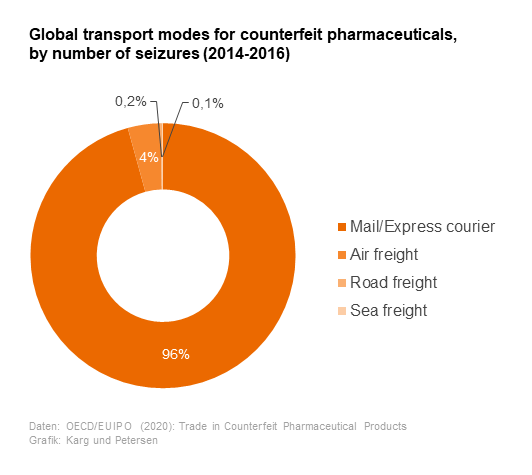 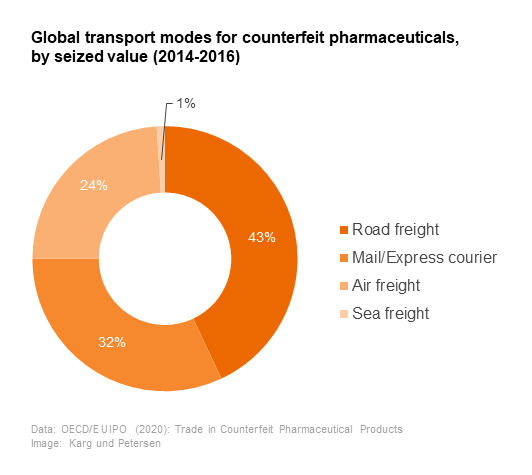 For the current report Trade in Counterfeit Pharmaceutical Products, data from around half a million international customs seizures were analyzed. In addition, information from the database of the Pharmaceutical Security Institute and the World Health Organization (WHO) was included too.