The cross-border trade in counterfeits alone reaches a staggering 464 billion euros per year, says a new study by OECD and EUIPO. According to that, fake goods accounted for around 2.5 percent of global trade in 2019 – and in Europe, the share is even significantly higher.

According to the current analysis, every year counterfeits worth around 464 billion euros are traded across borders as part of the international trade alone. This is a result of the new study Global Trade in Fakes – a Worrying Threat by OECD and EUIPO, which updates much-cited analyses from 2013 and 2016. The international trade in counterfeits is thus almost as large as the gross domestic product of countries such as Austria or Belgium. However, the value of the total counterfeit trade is likely to be much higher, as the analysis only considers cross-border trade – and not counterfeits produced and traded domestically.

Counterfeits account for around 5.8 percent of all imports into the European Union according to the analysis; in absolute figures, this is a total value of around 119 billion euros. Counterfeit luxury goods, including leather goods and bags, shoes, watches, clothing, and jewelry, were particularly frequently imported into the EU. The countries in Europe that are especially affected include France (18 percent of the customs seizures analyzed in the study involved counterfeits of products from French companies), Germany (16 percent), and Italy (9.8 percent).

Internationally, the USA are the country most affected by IPR infringements according to this analysis – most of the customs seizures analyzed (ca. 39 percent) involved counterfeits of products from US companies. However, companies from countries often considered to be the main sources of counterfeit products are also often affected, such as China and Hong Kong. According to the current study, most of the counterfeit shipments came from China and Hong Kong. Turkey follows in third place; with the report highlighting that the share of counterfeits originating from Turkey increased from around 4 percent to around 12 percent, 2016 to 2019, while Hong Kong’s share decreased. 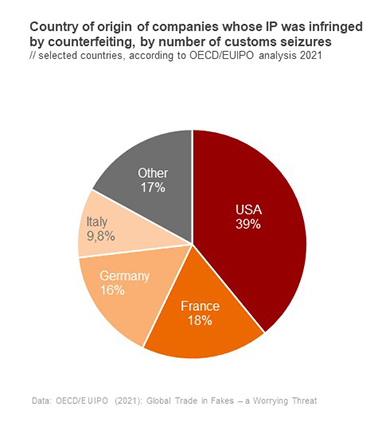 Particularly often, counterfeit shoes, clothing, leather goods, and electrical machinery and electronics had been seized internationally, similar to 2016, according to the current study. Frequently seized fakes also included perfumes/cosmetics, toys, watches, and jewelry; however, their share decreased slightly compared to 2016. The mode of transport of most seized consignments was postal shipments, followed by air freight and express shipments. Looking at the seizure value, sea freight shipments ranked first, followed by postal shipments and air freight shipments. 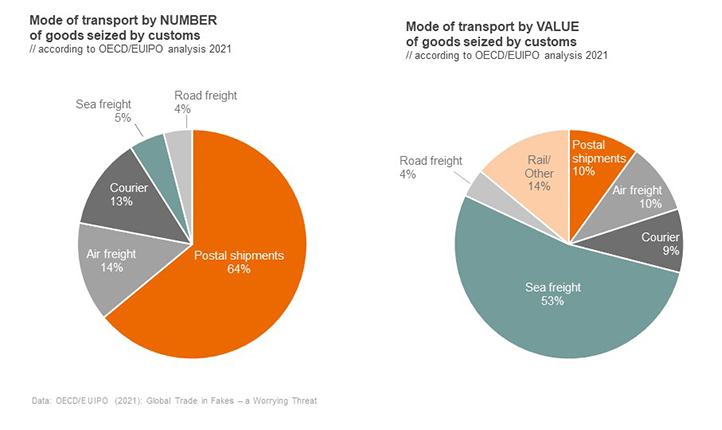 Turning to the coronavirus pandemic, the current study notes that the Covid-19 pandemic has led to the establishment of new, complex transport routes for counterfeits. Consequently, counterfeiting networks have been able to continue delivering fake goods into the EU and USA despite disruptions of individual routes and local lockdowns during the pandemic. In addition, the study sees an increased trade in illegal products via the Internet in the wake of the pandemic. This rising counterfeit trade on the Web coincides with a general e‑commerce boom – online trade in the USA, for example, grew by almost 40 percent between 2020 and 2021. This has reportedly also led to a massive increase in the availability of counterfeits of all kinds on the Internet.

With the outbreak of the coronavirus pandemic, counterfeiters also often responded quickly to a shift in demand. For example, fraudsters not only offered counterfeit personal protective equipment (PPE), but also counterfeit equipment for manufacturing fake PPE goods. Counterfeiters also took advantage of the altered circumstances to make illegal profits from foods and luxury foods, including alcoholic beverages, as the report states.

The study, published in late June by OECD (Organisation for Economic Co-operation and Development) and EUIPO (European Union Intellectual Property Office), is based on an analysis of customs data from 2019. Earlier this year, OECD and EUIPO already published a high-profile study on the transport routes of counterfeits, concluding that sea freight is the most important transport route for counterfeits.