More and more counterfeits from China are exported to Southeast Asia, as a recent analysis shows. At the same time, illegal exports to Europe are increasing too; Germany is one of the main target countries for counterfeit shipments to the EU.

Current analyses of Chinese customs data indicate an ongoing shift in destinations of counterfeits originating in China. This is the result of a report in the expert magazine WTR based on seizure information of the authorities in China, with participation of the companies Law Business Research and Rouse. The analyzed data provide information about the number of seizures by Chinese authorities that resulted in punishment decisions. It includes cases from 2013 up to, and including, the first half of 2019.

Particularly striking is the rapid increase in counterfeit exports to Southeast Asia: the value of seized shipments destined for ASEAN countries has risen by around 450% in the last two years – while the total value of Chinese exports to ASEAN nations has only increased by around 27%. Whereas in 2014 Chinese authorities had stopped 66 shipments destined for Southeast Asia, they stopped a total of 299 such shipments in 2018. The trend indicated by the analyzed data is said to be representative – but the data only covers part of the actual seizures by Chinese customs. The true extent of illegal trade is supposed to be several times higher. 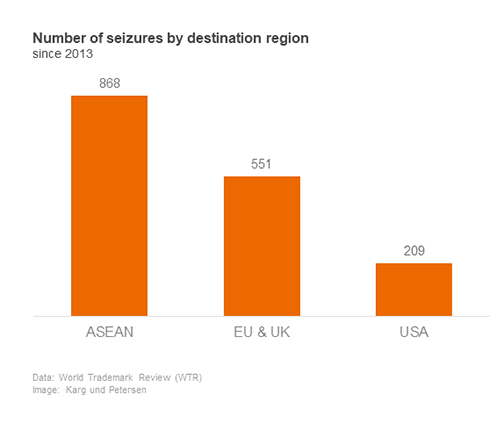 Most of the seizures recorded since 2013 occurred in Malaysia and Singapore. Singapore was one of the most important destinations for counterfeit consignments; presumably because it is the largest transshipment port in the world, according to the assessment. In shipments for ASEAN countries, counterfeit clothing and shoes were frequently seized, followed by machine parts and bags. The brands most affected include Nike, Adidas, and Disney, as well as luxury brands such as Gucci, Louis Vuitton, and Chanel. 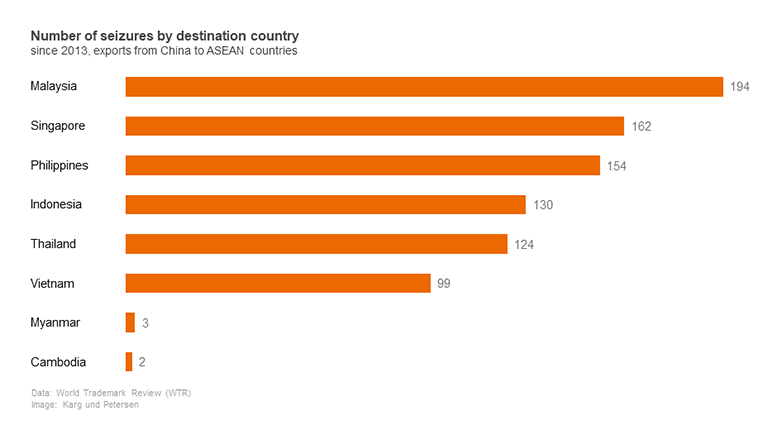 As for shipments to the EU and the United Kingdom (UK), the Chinese authorities also recorded a significant increase since 2016. As per the report, a total of 551 of the seizures analyzed had their destination in the EU or the UK since 2013. Particularly often, deliveries were supposed to go to France, Germany, Greece, or the UK. Overall, these countries accounted for around 80 percent of the value; this amounts to counterfeits worth more than eight million Chinese yuan (approx. 9.9 million euros). In the first half of 2019, more than half of the previous year’s figure was already achieved.

The brands most affected by such illegal shipments to the EU and the UK include Adidas, Nike, Samsung, and Louis Vuitton; the most frequently confiscated items were fake clothing and shoes. In addition, a large number of counterfeit bags were destined for these markets. 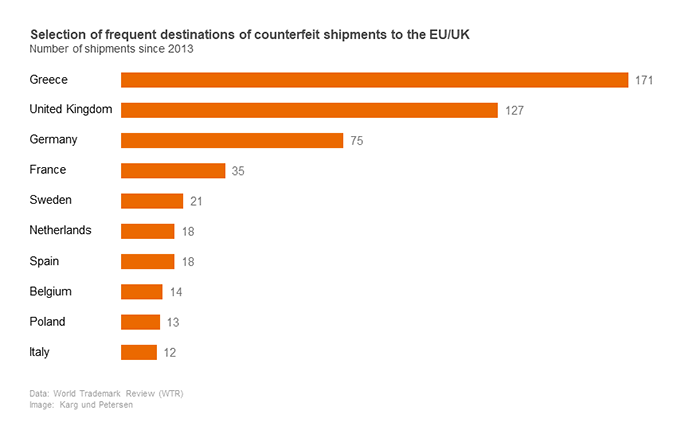