30. July 2021
© Pichsakul/stock.adobe.com
//
Recent studies
For consumers, brand owners are often also responsible when it comes to counterfeiting, says a recent study. One in five consumers would even boycott a brand if they unintentionally bought a counterfeit on the Web.

Manufacturers and brands may face a boycott from buyers if those unintentionally purchased a counterfeit of one of their products on the Internet. This is one finding of a current study on online trade in cosmetics and personal care products, as reported by the trade magazine WTR. Consumers in Germany, Spain, the United Kingdom, and the United States had been surveyed for the analysis.

According to this, around one in five respondents said they would not buy any more products from a brand if they had unwittingly purchased a counterfeit online. Around 16 percent of consumers surveyed would even hold the original manufacturers responsible for the extent of counterfeits offered and traded online. Seeing that, it might seem surprising that for merely around two-fifths of consumers, an unintentional counterfeit purchase would be a wake-up call to make future purchases only from a brand’s official web store.

About 19 percent of consumers surveyed stated that they deliberately buy counterfeit cosmetics or personal care products on the Internet, according to the report. It seems of particular concern that more than half of these consumers (ca. 52 percent) also claim to regularly buy counterfeits. In the United States, the share of consumers intentionally purchasing fake cosmetics is even higher than one-third (36 percent). Around 34 percent of US consumers also said they had already fallen victim to counterfeit products sold online.

Generally, awareness of counterfeiting on the Internet seems high, according to the study: around 72 percent of respondents said they were aware of fakes being offered online. However, consumers seem to lack helpful guidance and tips – reportedly, a total of 57 percent is unsure whether they could recognize signs of counterfeiting. In addition, the fact that around 65 percent also stated that they had bought more beauty and care products on the Internet within the last twelve months could mean increased sales opportunities on the Web for counterfeiters. More than a fifth of respondents (26 percent) also assume that products listed on official online marketplaces are original, while around 40 percent still trust some online marketplaces. 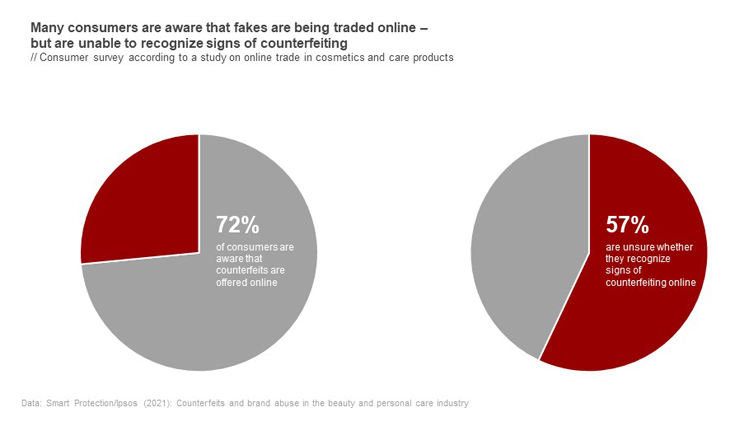 In light of these findings, companies are strongly advised to educate and raise awareness of counterfeiting – and to show consumers that they are taking action against fakes. “It’s a positive message that beauty brands are investing in the protection of both their products and customers, and as so many consumers remain unaware of the risks associated with counterfeit beauty and personal care items, it seems logical to spread the word to improve awareness”, said Ignacio Muguiro, Branding Director at Smart Protection.

The study Counterfeits and brand abuse in the beauty and personal care industry was carried out by the brand protection provider Smart Protection and the market research firm Ipsos. It can be requested for download online.