12. December 2021
© Grecaud Paul/stock.adobe.com
//
News from customs and authorities
Authorities in the EU confiscated fewer IP-infringing products in 2020 than in the previous year – continuing the trend of the last two years. This is the picture given by a newly published report, which for the first time analyzes both seizures at EU borders and within the EU in one go.

Around 66 million products worth around 2 billion euros were seized by authorities in the European Union (EU) in 2020 due to presumed infringements of intellectual property rights such as trademarks. This is the result of the report recently published by the EU Commission and the EUIPO. For the first time, this new analysis summarizes the actions taken by police, customs, and market surveillance authorities both at EU borders and within the EU.

Overall, according to the report, authorities of EU member states seized around 13 percent fewer items in 2020, year-on-year (2019: 76 million items). The value of the seized products also decreased – by around 19 percent to about 2 billion euros. One reason given for this was the global coronavirus pandemic. Covid-19 led to reduced overall trade volumes in the first months of the pandemic, for example, and fewer goods crossed borders. However, authorities also faced difficulties in conducting inspections, the report says. 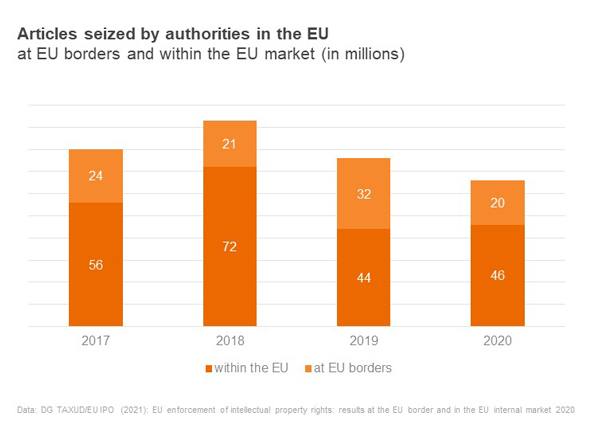 The most active countries are highly important: More than nine out of ten IP-infringing items were seized in just those ten EU members that recorded the most seizures and the highest seizure value. While Italy leads in terms of seizure volume (around one third of items seized), Greece had the largest share in terms of seizure value (also with around one third). The top 10 countries also include Germany (sixth position in terms of articles seized and place three when looking at seizure value), alongside further countries such as Belgium, the Netherlands and Spain.

A look at the EU borders shows that the seizure value increased by around 2.5 percent in 2020: last year, the value of seized goods was around 778 million euros, while in 2019 it was around 759 million euros, authorities reported. However, the number of proceedings initiated and articles seized declined. This was mainly because more high-priced items were seized, including clothing and watches, for example. 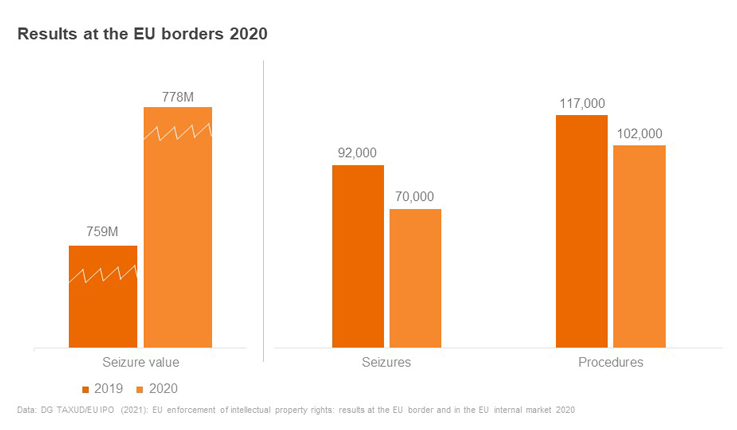 The results within the EU paint a contrasting picture: Despite the effects of the coronavirus pandemic, the number of goods seized for IP violations increased significantly in 2020, reaching around 46 million products (2019: 44 million products). This represents an increase of about 3.6 percent. The value of seized products, however, fell by around 27 percent, as fewer high-priced products were seized. 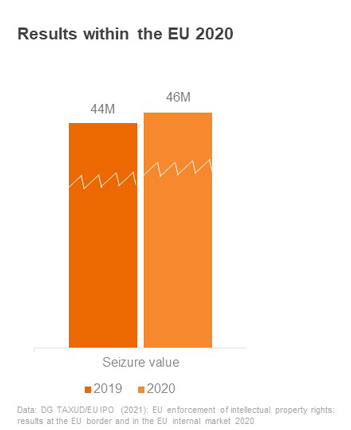 China remains the main country of origin for the majority of IP-infringing products, as in previous years – around half of the seized items originated from the People’s Republic. Greece is newly ranked second in 2020, due to large seizures of packaging materials; and Hong Kong is ranked third. In terms of seizure value, China also leads the field, followed here by Hong Kong, and Turkey. Further relevant countries include Singapore (especially for counterfeit smartphone accessories), Saudi Arabia and the UAE (for counterfeit watches), as well as Russia (for counterfeit automotive accessories). 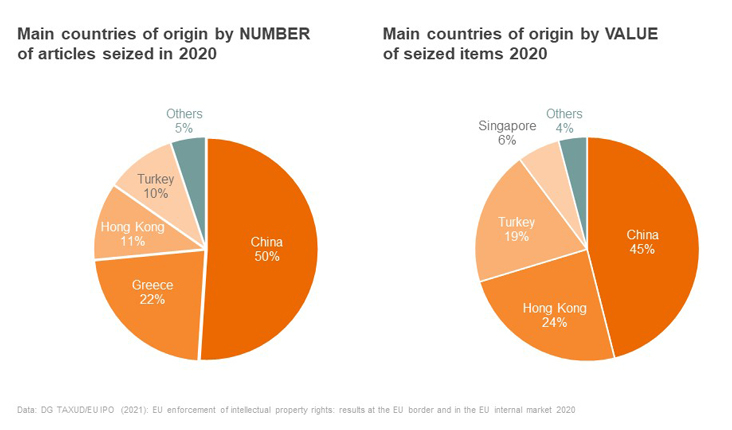 The report EU enforcement of intellectual property rights: results at the EU border and in the EU internal market 2020 was published at the end of November. It combines the customs results previously published by the European Commission’s Directorate General for Taxation and Customs Union (DG TAXUD) (see report for 2019) with the seizures within the EU market previously published by the European Union Intellectual Property Office (EUIPO) (see report for 2019).