30. June 2021
© Andrey Kuzmin / Fotolia.
//
Recent studies
A new analysis by the European Commission shows which countries outside of the EU are seen as having serious problems in protecting intellectual property. The EU sees a strong need for action in thirteen countries in particular.

IP infringements and counterfeiting remain major problems for European companies in several non-EU countries, according to the European Commission’s new Third Country Report 2021. Based on the extent of the economic damage to companies from the EU, the EU Commission’s working paper assigns three priorities to the surveyed countries with deficiencies in IPR protection.

The report sees the situation in China as particularly problematic. The People’s Republic is again the only country that is assigned the highest priority, as it was the case in last year’s Third Country Report 2020. China is the dominant country of origin for counterfeits, with around 80 percent of all illegal counterfeits originating from the People’s Republic, according to the EU Commission’s report. In addition, the scale and persistence of the problems in the country are given as reasons for the prioritization; also, the report mentions forced technology transfer as a particular, systematic problem especially affecting high-tech companies. 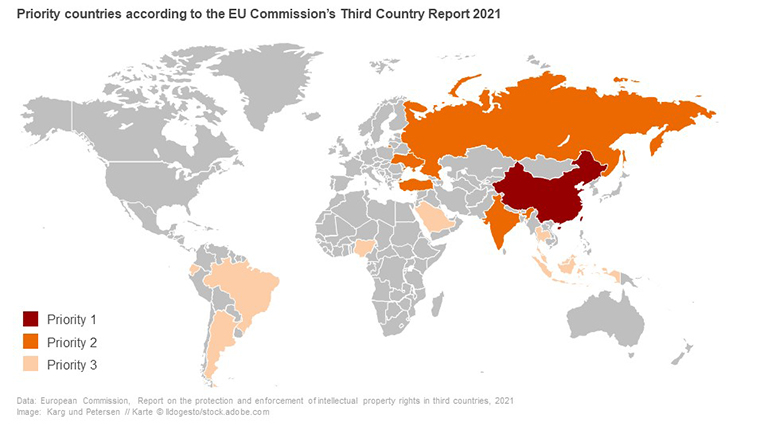 The working paper of the EU Commission assigns India, Russia, Turkey, and Ukraine the second-highest priority. Reasons given here are serious, systematic problems in IP law; companies from the EU are suffering considerable economic damage, says the assessment. Moreover, the countries have apparently made little or no progress since last year’s analysis.

The third-highest priority countries are Argentina, Brazil, Ecuador, Indonesia, Malaysia, Nigeria, Saudi Arabia, and Thailand. These countries are also mentioned as showing serious problems in IP protection; though to a lesser extent than the countries with a higher priority. Indonesia was reassigned to priority three this year (2020: priority two), due to a new patent law aligned with international standards. Nigeria and Saudi Arabia, which had been included as new countries in last year’s report, are again seen as being of concern in the current edition.

Finally, the EU analysis also identifies a number of countries that should be monitored closely, as free trade agreements have been or could be concluded with them. These include Canada, Mexico, South Korea, and Vietnam; also, the protection of protected geographical indications should be monitored more closely for some countries, including Ecuador, Colombia, and Peru. No longer included in the report are Israel, Morocco, Paraguay, the Philippines, South Africa, Switzerland, and the United Arab Emirates (UAE).

The EU Commission’s report identifies insufficient enforcement of IP rights as an acute issue in all the countries mentioned in the assessment – some of which might be attributed to weak political will or a lack of resources. For example, customs authorities in some countries could not act ex officio to stop, seize, and destroy counterfeits; as a result, cross-border trade in counterfeits could not be curtailed effectively.

EU: Every second seized import is from online trade