France and Switzerland have both seen a dramatic increase in the number of counterfeits seized in 2021, as the latest customs reports from the two countries show. Namely, customs officials in France confiscated around 9.1 million counterfeit items last year – this represents a massive 62% increase from the previous year, according to the French customs’ annual report. And in Switzerland, the number of counterfeit products seized rose to nearly 6,000, according to data from Swiss authorities – representing an increase of more than 34%.

In France, the number of counterfeits seized in 2021 was the highest for five years (2016: 9.2 million). The most frequently seized products by French customs are counterfeit personal care products (around 1.7 million items), followed by around 1.6 million fake toys and sporting goods. Other commonly seized products include clothing, cell phones, footwear, as well as food and beverages. About one-third of the counterfeits seized were identified in mail and express shipments. Also, in late 2021, investigators dismantled an illegal production facility for counterfeit cigarettes near Paris, where they confiscated raw material, packaging material, and machinery for manufacturing fake cigarettes. 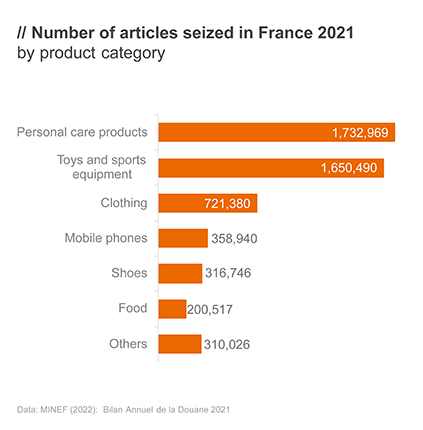 In parallel, Swiss Customs have also reported a significant increase in the number of counterfeits seized in 2021, of around 34%. Swiss officials confiscating around 6,000 counterfeit items in 2021, compared to around 4,400 in the previous year. One reason given for this increase is the booming online trade – which was also fueled by the Covid-19 pandemic, authorities say. At the same time, seizures of counterfeits in travel have increased, seeing that traveling increased again in 2021 with reduced restrictions, the officials added. Here, Swiss investigators seized nearly 30% more counterfeits year on year, according to the report.