30. April 2022
© Andreas Scholz/stock.adobe.com
//
News from customs and authorities
With 2021’s results, customs in Germany has again registered a dramatic increase in seized counterfeits. The annual customs statistics show a particularly large boom in some industries – and a shift in relevant transport routes.

Officials of German Customs seized counterfeit and fake goods worth around 315 million euros last year. This was reported in the Customs Statistics 2021 (Zollstatistik 2021) and the Intellectual Property Rights Statistics for 2021 (Statistik für Gewerblichen Rechtsschutz 2021), released in early May and presented by the Federal Minister of Finance, Christian Lindner, together with the President of the General Directorate of Customs, Colette Hercher, and the President of the Customs Criminal Investigation Office, Dr. Rainer Mellwig. This represents a massive increase of approx. 32% compared to the previous year. A total of around 18.8 million counterfeit products were seized in 2021 – up from 3.7 million seized items the previous year. Counterfeiting was a growing problem that would be further exacerbated by online commerce, the Directorate General of Customs concluded.

A particularly dramatic increase was recorded for fake electronics and computer equipment: Here, the value of seized counterfeits has even almost tripled – with an alarming increase of over 180% to now 39.7 million euros (2020: 14 million euros). The number of electronic items seized almost doubled too, from around 255,000 products in 2020 to almost 454,000 products in 2021. This sharp increase looks even more alarming when compared to the value of 2019: two years ago, the value of confiscated counterfeit electronics and computer equipment was only at about 7 million euros. So, over the course of two years, there is a huge increase of more than 460% in total. 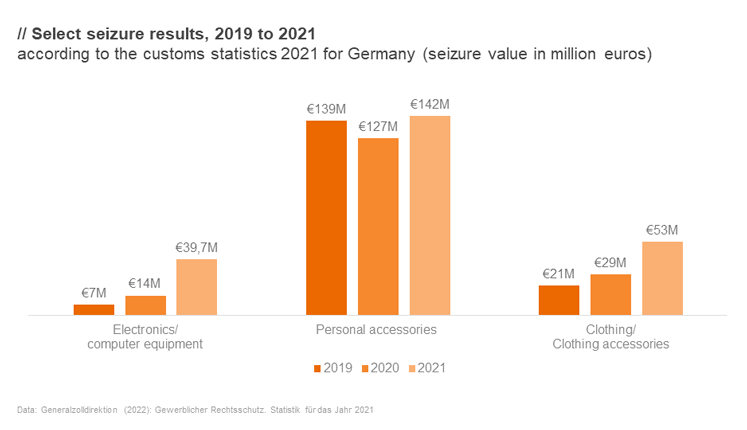 As the main country of origin of counterfeits, China is once again in the spotlight: around 88% of the counterfeit articles seized by German Customs originated in the People’s Republic. The second place takes Hong Kong (around 6%), a Chinese special administrative region, followed by Turkey with around 2% of the fakes seized. Other countries accounted for around 4%. Looking at the seizure value, Hong Kong emerges as the main country of origin (around 47%), ahead of China (around 28%). Turkey again shows as a further relevant country of origin (around 7%), followed by Thailand (around 4%), the USA (around 3%), Taiwan (around 2%), the United Kingdom (around 1.5%), and Nigeria (around 1%). Other countries account for around 7% of the total seizure value. 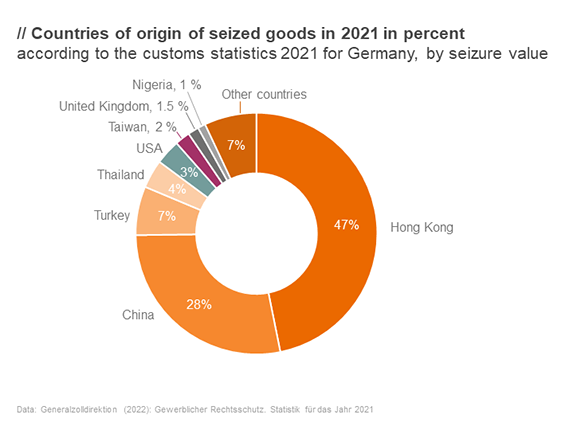 The importance of sea freight increased considerably again in 2021, after the share had declined sharply in 2020. The vast majority of seized counterfeits (around 86%) were confiscated in sea shipments. The second most important transport route for counterfeits in terms of the number of seized products was air freight (around 7%); the role of air freight shipments declined sharply year-on-year, back in 2020 around 31% of seized goods had been seized in air freight. By contrast, if we look at the value of seizures, air freight shipments are clearly in first place with around 59%; postal traffic accounted for around 20%, and sea freight for around 14% of the value of counterfeits seized. 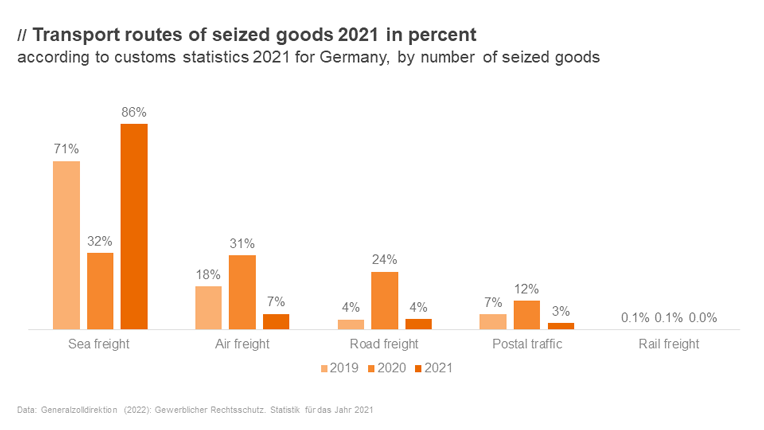 A look at the various intellectual property rights infringed reveals that by far the largest share of seizure value was due to infringements of trademark rights (around 86%). Next to that, more than one-tenth of the seizure value (around 11.9%) was caused by design infringements – with the role of protected designs almost tripling year-on-year (2020: around 4.3%). Infringements of protected geographical indications (around 1.2%) and of copyrights, utility models, and other IP rights such as patents (together another around 1%) played a minor role in 2021, as in previous years.

Last year, customs officers were once again operating under challenging conditions against counterfeiting due to the coronavirus pandemic. The President of the General Directorate of Customs, Colette Hercher, therefore thanked the officers in particular for their efforts and praised the fact that the results were owed to the “great commitment and heart and soul” of the officials.

Praise has also come from businesses, with the German brand protection group Aktionskreis gegen Produkt- und Markenpiraterie (APM), for example, describing the customs authorities in a recent release as an indispensable bulwark in the fight against counterfeiting. At the same time, the APM points out the problems that are, for example, caused by the sale of illegal goods on the Internet: “Since it is typically a matter of many individual packages, customs can hardly inspect all suspicious shipments,” says Volker Bartels, chairman of the group. In this regard, the APM hopes that the situation will improve in the future thanks to the upcoming Digital Services Act of the European Union.

The year in review – your highlights of 2022