German customs authorities confiscated counterfeit goods worth around 238.87 million euros last year, according to the Customs Statistics 2020 (Zollstatistik 2020) and the Intellectual Property Rights Statistics 2020 (Statistik für Gewerblichen Rechtsschutz 2020), which were presented by the German Federal Finance Minister, Olaf Scholz, and the President of the German Directorate General of Customs (Generalzolldirektion), Colette Hercher, in May. Year on year, this represents a significant increase of more than 6 percent. In total, the authorities seized around 3.7 million fake goods. Although this is a decrease compared to the previous year (2019: ca. 5.2 million goods), the value of seized items rises to a new all-time high, as is also highlighted by media reports.

The increase in seized medicines is particularly dramatic, as the statistics show. For these, the number of seizures has doubled year on year with now 52 seizures (2019: 26); the value of seized articles has even almost quadrupled, reaching over 2 million euros. The value of seized personal care products also quadrupled, rising to a shocking 12.6 million euros in 2020. Authorities saw further sharp increases in counterfeit electronics as well as food and beverages; seizure values here rose by ca. 90 percent and ca. 50 percent, respectively. 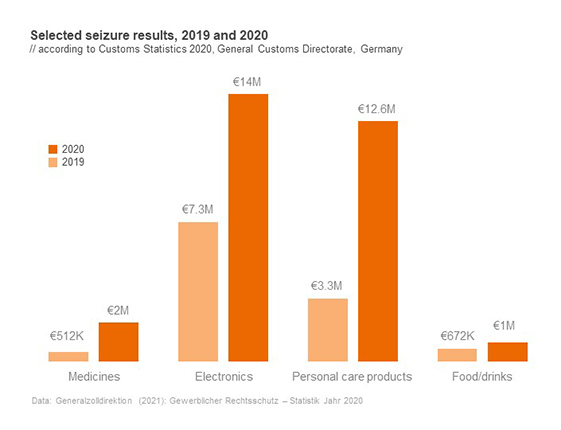 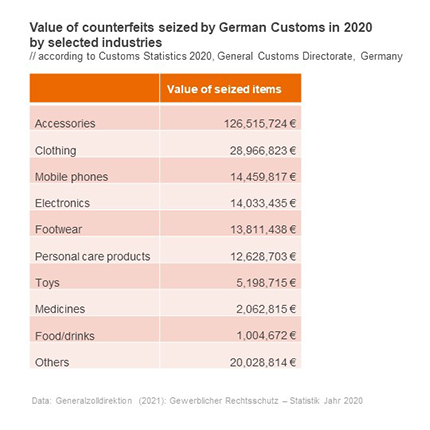 Postal shipments again played an important role in counterfeiting trade in Germany last year: almost 8 out of 10 seizures concerned postal shipments. Looking at the value of the seized goods, however, only around 25 percent related to postal traffic, but more than half to air freight (ca. 53 percent). 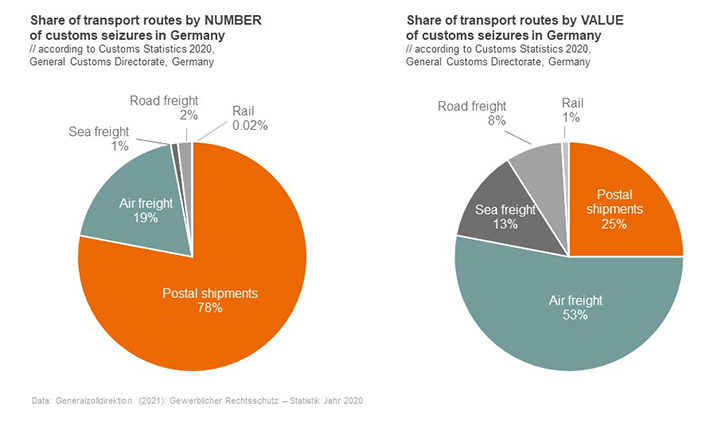 As in the previous year, China is at the top of the list for the countries of origin of counterfeits – in 2020 with around 44 percent of seized products, i.e. a slight decrease of around 5 percent compared to the previous year. Hong Kong follows in second place with around 24 percent and a significant increase of around 12 percent, year on year. Other countries origin of counterfeit products seized in Germany include Korea (around 8 percent), Jordan (around 6 percent), Turkey (around 5 percent), as well as Saudi Arabia (around 3 percent), India (around 2.5 percent), Lebanon (1.3 percent); while other countries accounted for another around 5.6 percent. 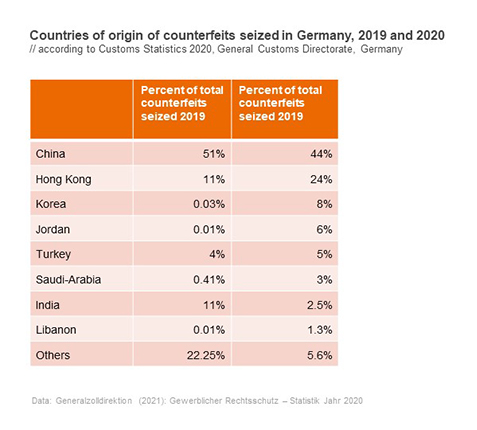 Seeing the sharp rise in customs seizure values, business associations are calling for stricter regulations against counterfeit trade on the Internet, as they are currently being discussed with the European Union’s planned Digital Services Act. “It is time for politicians to face the facts and curb the distribution of counterfeit products via online trading platforms and the well-known social networks with legislative measures,” said Christian Köhler, CEO of the German brand association Markenverband e. V.

The brand protection group Aktionskreis gegen Produkt- und Markenpiraterie e.V. (APM) demands, among others, verification obligations for operators of e-commerce platforms: “Customs authorities are doing an excellent job in the fight against counterfeiting,” says APM chairman Volker Bartels. “However, customs can only control a certain proportion of shipments, especially if many individual shipments are ordered on the Internet. Customs cannot and should not handle this task alone.”