More than half of the value of seized counterfeits is obtained from sea freight shipments, and Germany acts as one of the main hub countries in the EU. This is shown in a new study by EUIPO and OECD – which also calls for more effective customs controls.

Maritime shipping is the number one mode of transport for counterfeit goods when looking at the value of seized counterfeits. This is highlighted in a new study by EUIPO and OECD – according to that, more than half of the total value of counterfeits confiscated by authorities between 2014 and 2016 was seized during the inspection of container shipments. 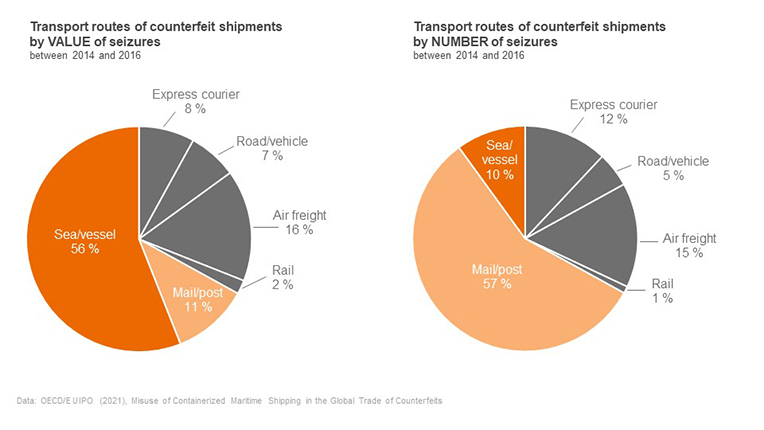 Looking at individual sectors and industries reveals interesting differences in the transport routes of counterfeits. In the case of counterfeit perfumes and cosmetics, for example, around 82 percent of the seizure value was achieved in maritime shipping. For toys (approx. 73 percent) and leather goods (approx. 57 percent), the share was also more than half – for counterfeit electronics, on the other hand, it was only 49 percent; and for clothing only 33 percent. For counterfeit clothing and textiles, the seizure value of sea freight and postal shipments is thus on par.

The main countries of origin of counterfeits transported via maritime shipping are in East Asia; China is in first place with 79 percent of the total seizure value, followed by India with only around 5 percent. The Southeast Asian countries of Malaysia, Vietnam, and Pakistan account for a combined total of around 3.6 percent of the seizure value, while Hong Kong and Taiwan account for just under 1 percent each. Outside of East Asia, the United Arab Emirates (UAE) are a relevant country of origin with a share of 1.4 percent, while Turkey accounts for 0.8 percent and Morocco and Egypt for 0.5 percent each. Turkey is particularly relevant for shipments destined for within the EU.

In many cases, just a few transport routes might be particularly relevant: More than half of all container shipments coming from major countries of origin of counterfeits into the EU entered Europe via just three countries: Germany, the Netherlands, and the UK (which was still part of the EU in the period under review up to 2016). Key ports of entry include Rotterdam, Hamburg, Felixstowe, and Antwerp; around 50 percent of all container shipments from five main countries of origin of counterfeits entered the EU through them in 2016. Surprisingly, some countries that otherwise handle a comparatively low volume of sea freight also play a relevant role in the import of counterfeits – including Bulgaria, Greece, Croatia, and Romania, for example.

Looking at the infrastructure projects being pushed by China and often referred to as the New Silk Road or One Belt, One Road (OBOR) initiative, the study suggests that the number of counterfeit goods reaching Europe via containers could further increase. Accordingly, ports on the Mediterranean coast could well play a more significant role in the trafficking of counterfeits into the EU in the future. 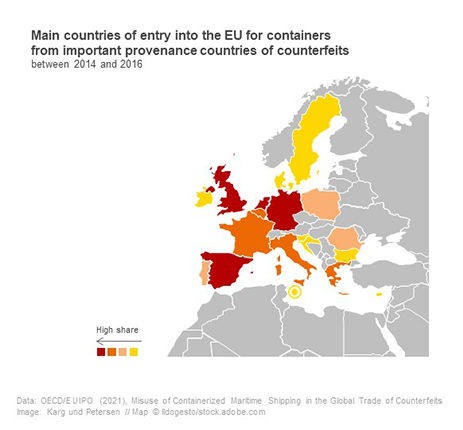 The study by EUIPO and OECD criticizes the fact that counterfeit trade might have a comparatively low priority among customs authorities, as fakes might be regarded as trade violations rather than as criminal offenses. In contrast, a recently published report by Europol shows that counterfeit trade is linked to other serious crimes. EUIPO and OECD are calling for increased capabilities to effectively inspect shipped goods; and for using more modern technologies, such as electronic manifests, which could help with risk analysis and thus allow for more targeted inspections. In addition, the study notes that brand owners and logistics companies could play a greater role in better preventing counterfeit shipments.

The study Misuse of Containerised Maritime Shipping was published in late February by the European Union Intellectual Property Office (EUIPO) and the Organization for Economic Co‑operation and Development (OECD). It is based on customs information of the OECD, the World Customs Organization, the European Commission’s Directorate-General for Taxation and Customs Union, the U.S. Customs and Border Protection, as well as the OECD’s International Transport Forum, Eurostat Comext, and the United Nations Conference of Trade and Development (UNCTAD). 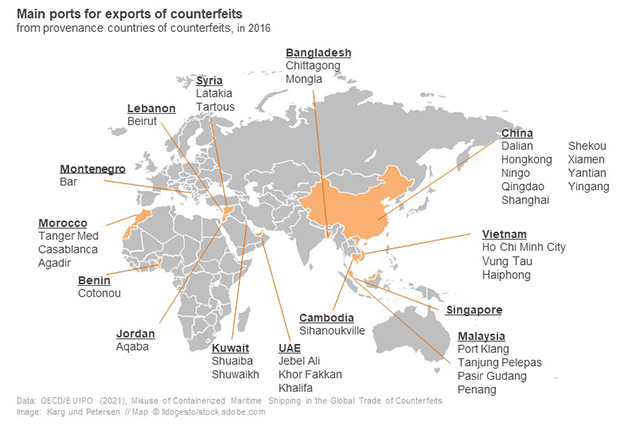