30. June 2022
© Rawpixel.com/stock.adobe.com
//
Recent studies
More than one in three young adults in Europe deliberately buys counterfeits, says a recent EUIPO study. This indicates that the share of buyers of fakes has more than doubled recently. One reason is the Covid-19 pandemic – but apparently also a generally high level of acceptance.

A large share of European young people is apparently inclined to deliberately and purposefully buy counterfeit products – and a staggering 37% have seemingly done so in the last twelve months. This is shown by the recently published EUIPO Intellectual Property and Youth Scoreboard 2022. The third edition of this pan-European survey also looks at opinions in the wake of the global coronavirus pandemic. 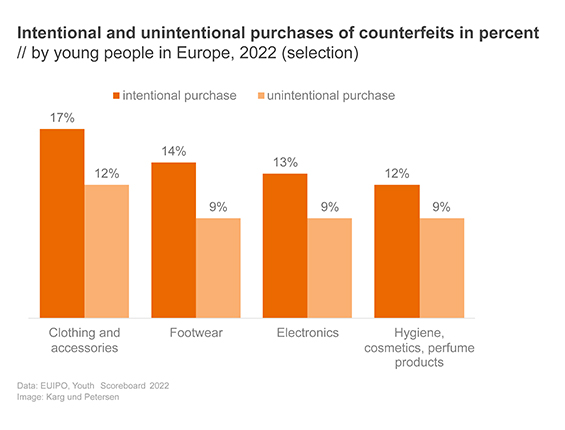 As a main reason for buying counterfeit products, the cheaper price of fakes is mentioned especially often – by almost half of all respondents (about 48%). Other reasons given by young adults include indifference as to whether a product was counterfeit (around 27%); the view that it makes no difference whether a product is an original or a fake (around 24%); or better availability and easier ordering of counterfeits, for example when shopping on the web (ca. 18%).

Worryingly, the social acceptance of counterfeits also appears to have risen significantly, according to the report. So, about 39% of respondents say they do not care if they buy a counterfeit – a significant increase compared to the 2019 result (about 31%). Some 60% also state that they are unable to distinguish between originals and counterfeits, and around 26% say they do not know if they have bought a counterfeit in the last twelve months. This illustrates that targeted brand protection communications can have decisive benefits for companies, for example in helping buyers to avoid counterfeits and in reducing the demand for fake products. 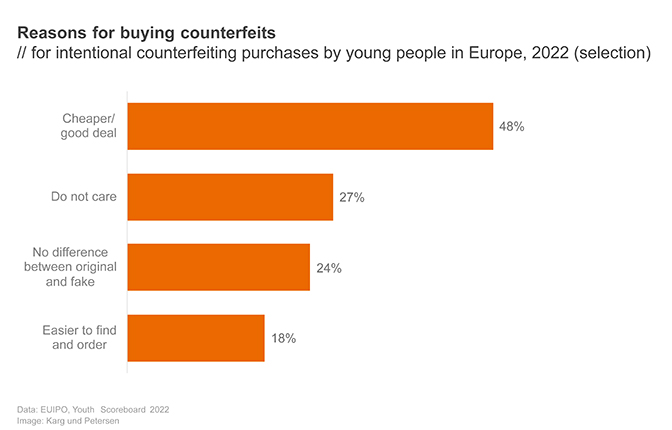 The scale of counterfeit purchases by young adults varies considerably from one EU member state to another. The situation seems particularly alarming in Greece, where around 62% of the young adults surveyed state that they had deliberately bought counterfeits. Likewise, more than half of the respondents (around 53%) indicate this in Cyprus, followed by Latvia, Spain, and Poland (between 46% and 44%). The share is particularly low in Italy (around 27%), Slovakia (around 26%), and the Czech Republic (around 24%). Germany is in the middle of the range with around 39%. 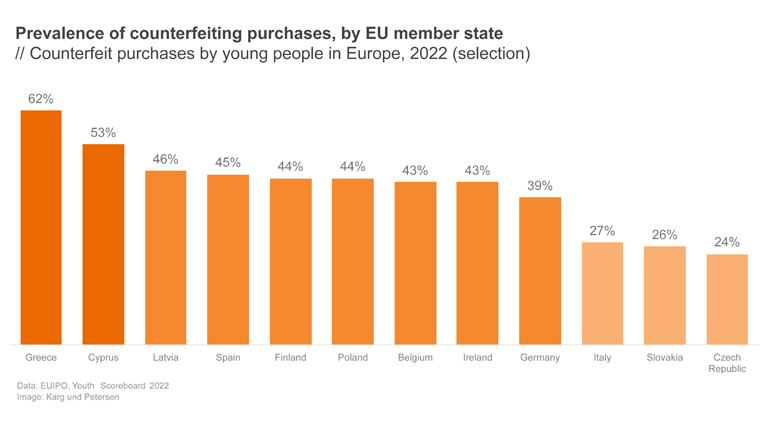 Good reasons for young adults to not buy counterfeits include worries about possible misuse of credit card data (around 43%), lack of product guarantees or refunds (around 31%), or health risks of counterfeits (around 31%). On a positive note, the study notes that the purchase of counterfeits could often be related to shortages of certain products in retail trade during Covid-19 lockdowns. This allows for the hope that the current increase could be a temporary trend.

The year in review – your highlights of 2022