Covid-19: Counterfeit drugs on the rise in Africa

26. May 2020
© AS Photo Project/stock.adobe.com
//
Economy news
The coronavirus pandemic could lead to a dramatic increase in counterfeit pharmaceuticals in Africa. The number of fakes seized has already increased considerably; scientists from the University of Tübingen are supporting the analysis of counterfeits.

According to estimates of the World Health Organization (WHO), one in ten medical products in low- and middle-income countries are substandard or counterfeit. Other studies even assume 48 percent. Experts are now concerned that the coronavirus pandemic could exacerbate this problem. This could be particularly serious in Africa, which already accounts for 42 percent of all reports of counterfeit pharmaceuticals. “The current focus on curbing Covid-19 spread means there is less focus on routine market surveillance”, says Delese Mimi Darko, Chief Executive of Ghana’s Food and Drug Authority (FDA). She fears an influx of substandard medical supplies across porous borders.

Twice as many unauthorized chloroquine products, year on year, were reported by Interpol as early as March as a result of the anti-counterfeiting operation Pangea XIII. The WHO, for example, warned already at the beginning of April about counterfeit chloroquine products found in Cameroon, Niger, and the Democratic Republic of Congo. Assumptions that this active ingredient could be used to treat cases of Covid-19 led to a sharp increase in demand and prices for the drug, which is generally used to treat malaria. While chloroquine is no longer widely used against malaria in Ghana, there have been increasing reports of substandard tablets. “If we find any chloroquine on the market now, there is likely to be issues with it,” says Kwasi Boateng, director of the non-profit organization United States Pharmacopeia-Ghana.

Counterfeit chloroquine found in Cameroon and Congo contained far too little or the wrong active ingredients, reports the University of Tübingen currently. This was shown by the research group led by Professor Lutz Heide of the Pharmaceutical Institute at the University of Tübingen; in cooperation with African pharmacists and the German Institute for Medical Mission e. V. (Difäm). According to their analysis, the counterfeits for example only contain an ineffective dose of chloroquine; or instead of chloroquine, the painkiller paracetamol or the antibiotic metronidazole. “This very bitter substance was probably used to imitate the bitter taste of chloroquine”, said Gesa Gnegel, a member of the research group. Due to the low dosage, the counterfeits might promote the development of resistant pathogens. The counterfeit drugs were not only found at illegal vendors but also in licensed pharmacies.

Experts believe that more counterfeits will be pushed onto the market. “Any potential medicine or vaccine reported to be effective against COVID-19 can trigger a desperate demand worldwide“, explains Heide. The problem will not be limited to drugs against the novel coronavirus Sars-CoV-2 – as the supply chains of pharmaceutical products have been disrupted by the coronavirus pandemic, developing countries in particular might face supply shortages. A large-scale sale of counterfeit drugs could be a consequence. 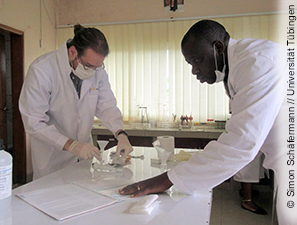 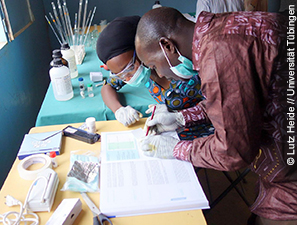 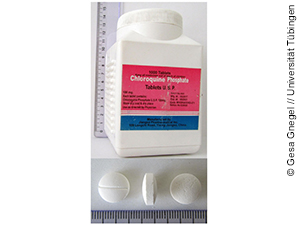