6. June 2022
© JustLife/adobe.stock.com
//
Recent studies
Counterfeiting causes damages worth billions in the mechanical engineering sector, a new study by the German industry association VDMA shows. About three in four German companies are affected – and one country newly moves into the top 3 countries of origin.

In 2021 alone, the loss in sales due to counterfeiting in the German mechanical and plant engineering sector is expected to amount to a staggering 6.4 billion euros. This is a result of the latest counterfeiting study by the industry association VDMA. Compared to the previous VDMA study from 2020, the estimated damage has somewhat decreased. Among other factors, VDMA attributes this to the fact that many companies are now taking more brand protection measures.

Overall, around three out of four surveyed companies say they are affected by counterfeiting – looking at medium‑sized companies with more than 500 and up to 1,000 employees, even all respondents say they suffer from counterfeiting. For around 60% of the companies, components and the exterior design are being imitated, followed by spare parts (for around 42% of companies), and entire machines (for about 40% of companies). So‑called ‘soft’ fakes, such as plagiarized catalogs, are less common, with 29% of companies reporting this. For the first time, the survey also asked about copycat websites and online stores, which affect one in five companies. 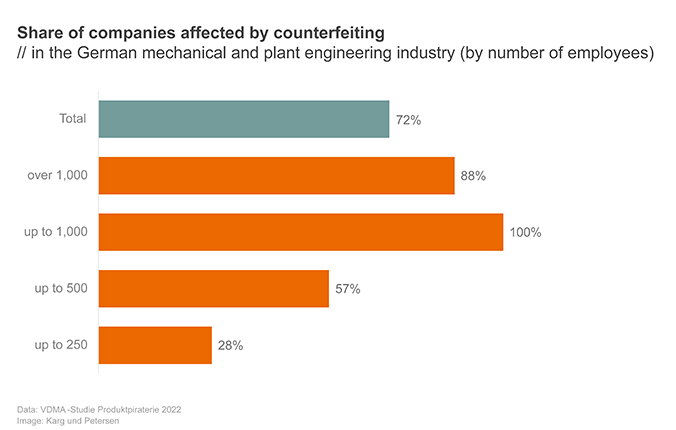 The loss in sales suffered translates to around 29,000 jobs lost that could be maintained without this damage, the VDMA says. In addition to lost jobs, counterfeiting can also lead to a tainted image, loss of competitive advantages, or unjustified recourse claims. On average, companies that record a loss in sales due to counterfeiting estimate the damage at around 4.9% of the company’s revenue; for companies with up to 250 employees, the figure is even as high as an alarming 6.8% of revenue. 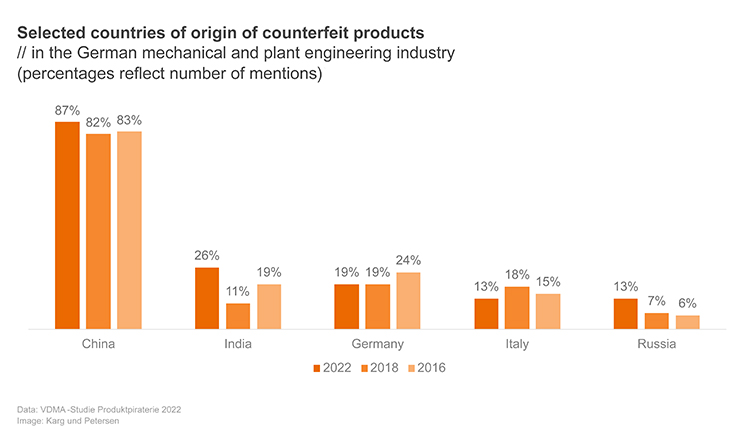 Significantly increased has the share of companies that take measures against counterfeiting. For example, more than half of the companies (around 58%) are taking out‑of‑court action against counterfeiting – around 20% more than two years ago. Around 35%  take civil legal action, and a further 19% resort to border seizures. Only around one‑third of the mechanical and plant engineering companies surveyed are not yet active (2020: 49%). This holds particularly true for smaller companies – probably also because they might be reluctant to take potentially expensive measures.

Further, crucial potential can be found in raising awareness for counterfeiting – as the VDMA emphasizes too: “We therefore recommend that companies first consider an out‑of‑court approach, such as legal letters, personal discussions, or awareness‑rising measures for customers. Experience shows that this leads to initial improvements, as many counterfeiters act a hidden way and do not want to be publicly named,” explains Steffen Zimmermann, Head of the VDMA Competence Center Industrial Security. The recently published Brand Protection Study 2022 by Karg und Petersen and Arvato Systems has also emphasized the great potential of targeted communications for an effective brand protection approach. 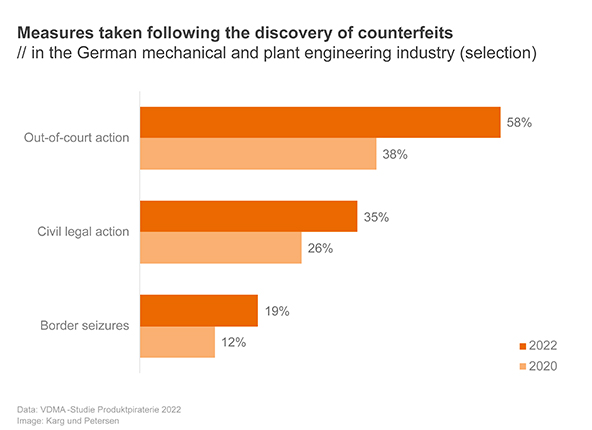 The VDMA Counterfeiting Study  2022 is the latest edition of the survey on counterfeiting in the mechanical and plant engineering industry published bi‑annually by the industry association since 2003. The current study was commissioned by the Mechanical Engineering Industry Association (Verband Deutscher Maschinen- und Anlagenbau, VDMA) and prepared by the Fraunhofer Institute for Applied and Integrated Security AISEC.