Sellers of counterfeit goods are apparently exceedingly active on the social media networks of Meta Platforms (the former Facebook group), a recent report suggests. Counterfeiters successfully use the social networks and e-commerce functionalities of Facebook, Instagram, and WhatsApp, according to the study by the analytics company Ghost Data – and achieve annual sales of several billion US dollars there.

This illicit trade has experienced a strong increase since the introduction of Facebook Pay, the launch of Facebook Messenger as a combined chat and sales tool, and the introduction of WhatsApp’s online catalogs for businesses, the report details. Meta pursues a strategy to become a leader in online commerce, attracting a crowd of ruthless counterfeiters, the report says. It further details that counterfeiters are particularly focusing on the short messaging platform WhatsApp, with its communications channel WhatsApp Business, where users can create ad-hoc product catalogs and offer products for sale. WhatsApp has become the “the counterfeiters’ favorite and most used tool,” the Ghost Data report explains.

For the analysis, Ghost Data had analyzed the platforms using software to identify counterfeiters, such as text and image analysis. Within 20 days, they identified around 27,000 accounts of counterfeiters active on Facebook at the end of October 2021. These profiles had an average of more than 1.250 Facebook friends – according to conservative estimates, the counterfeiters could thus reach around 20 million individual contacts via news feeds and private messages. On Instagram, around 20.300 active counterfeiter profiles were identified, which could reach around 10 million people, says the estimate.

Counterfeiters reportedly use a variety of approaches on social networks to hide their illicit business: These for example include the options to post content in closed groups and to send private messages. On Instagram, for example, fraudsters also approach potential customers proactively, e.g. by commenting on posts of well-known accounts and influencers; moreover, counterfeiting accounts are also active frequently, with up to 500 posts per month. To avoid being spotted by Instagram’s monitoring software, they also post text as image files, for example.

Many of the identified counterfeiters operated primarily out of China, with the study also focusing on Chinese merchants. However, fraudulent traders also came from Russia, Turkey, Indonesia, Ukraine, and Brazil. The study estimates the number of Chinese traders at up to 7,000 sellers – with annual sales of up to 2.1 billion US dollars (about 1.87 billion Euros). Most of the illegal activity on Facebook and Instagram appears to concern luxury clothing and accessories. 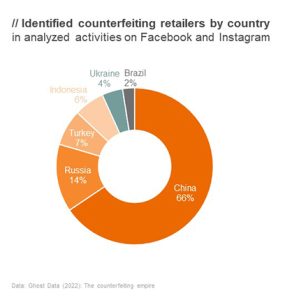 The report sharply criticizes Meta’s anti-counterfeiting measures, calling them disappointing and insufficient. According to the analysis, the study once again shows the inability of the corporation behind Facebook, Instagram, and WhatsApp to control illegal activity on its platforms. Meta itself refers to ongoing improvements to enforce guidelines as well as about investments in new technologies, the trade magazine Securing Industry reports. Ghost Data’s analysis, in contrast, concludes that counterfeiters seem to be able to easily bypass filters, for example by avoiding certain keywords and covering logos with stickers. “Such trivial tricks make possible to effectively use WhatsApp Business catalogs to promote and sell counterfeit goods,” states the report.

The fact that counterfeiting could be widespread on social media was e.g. also shown in 2021 by a study conducted by the EUIPO, which also looked at Facebook and Instagram, among others. One in ten interactions on social media addresses suspected counterfeiting, the EUIPO research said, looking at several social networks and at interactions regarding physical products by users from European countries.